No doubt you’ve all heard and read about the huge and wonderful Occupy Wall Street satellite rally in Times Square this afternoon.

This crowd was anything but the shiftless hippies of Ann Coulter’s imagining. I bet a lot of them were Democrats, which means that the process of productive disillusionment I’d hoped for in the summer of 2008 is finally kicking into gear, after a long delay:

Enough critique; the dialectic demands something constructive to induce some forward motion. There’s no doubt that Obamalust does embody some phantasmic longing for a better world—more peaceful, egalitarian, and humane. He’ll deliver little of that—but there’s evidence of some admirable popular desires behind the crush. And they will inevitably be disappointed.

As this newsletter has argued for years, there’s great political potential in popular disillusionment with Democrats. The phenomenon was first diagnosed by Garry Wills in Nixon Agonistes. As Wills explained it, throughout the 1950s, left-liberals intellectuals thought that the national malaise was the fault of Eisenhower, and a Democrat would cure it. Well, they got JFK and everything still pretty much sucked, which is what gave rise to the rebellions of the 1960s (and all that excess that Obama wants to junk any remnant of). You could argue that the movements of the 1990s that culminated in Seattle were a minor rerun of this. The sense of malaise and alienation is probably stronger now than it was 50 years ago, and includes a lot more of the working class, whom Stanley Greenberg’s focus groups find to be really pissed off about the cost of living and the way the rich are lording it over the rest of us.

Never did the possibility of disappointment offer so much hope. That’s not what the candidate means by that word, but history can be a great ironist.

Here are some pix. It was hard to get a good perspective on the crowd from ground level, but it seemed to stretch for blocks, with people lining both sides of the Crossroads of the World.

A guy in a Teamster jacket attracted some press attention (“so you’re not all hippies,” asked the reporter). Beyond, the news zipper reports that “Occupy Wall Street Movement Goes Worldwide.”

The proceedings enjoyed a visit not only from the Comics Convention folks, but also the Z O M B I E C O N n y c crew: 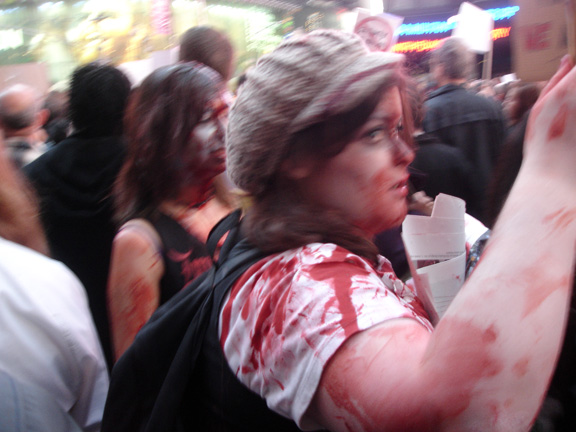 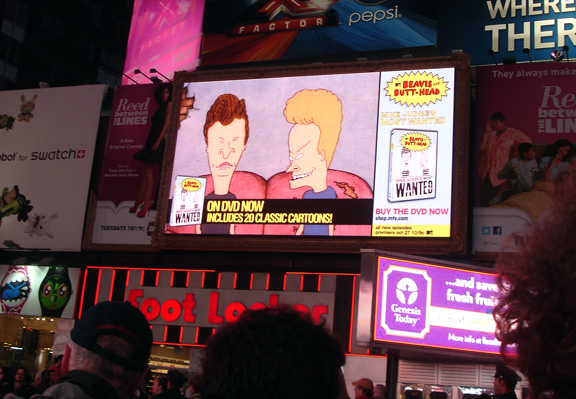 And over on 8th Ave., a delegation of 99%-ers visit Danny Meyer’s Shake Shack—where we repaired soon after young Ivan began chanting: “The people, united, will now have dinner.’

We had to get home to put our 5-year-old to bed, so we missed the part where the NYPD reportedly started arresting people. There sure were a lot of cops on the scene. Next up: Washington Square Park? That’s a city park that closes at 1 AM, so the police will have a challenge on their hands.