[Reading Greg Smith’s open resignation letter to Goldman Sachs in today’s New York Times, which described a systematic fleecing of clients as the institutional norm, reminded me of Frank Partnoy’s 1997 book F.I.A.S.C.O. Here’s my review, from LBO #80. If you like it, subscribe today and make sure it keeps coming.]

It might be best to start a consideration of this revealing book from one of its final pages, where Frank Partnoy explains why he decided to end his brief career as a derivatives salesman at our snazziest investment bank, Morgan Stanley:

By April 1995 I had become … the most cynical person on Earth. I now believed everything was a fraud, and I had a well-founded basis for my beliefs. Derivatives were a fraud, investment banking was a fraud, the Mexican and Japanese financial systems were frauds …. The value system I had acquired in recent years included shooting at clients and blowing people up, all in the name of money …. Everyone I knew who had been an investment banker for a few years, including me, was an asshole. The fact that we were the richest assholes in the world didn’t change the fact that we were assholes. I had known this deep down since I first began working on Wall Street. Now, for some reason, it bothered me.

Of course, Partnoy and his colleagues didn’t literally shoot at clients. But they did brag about “ripping their faces off.” This was the ideal trade—one that involved unknowingly separating a client from a huge amount of money, even if the client’s actual face was left intact. According to Partnoy, the motto of his counterparts at Bankers Trust, an institution almost as prestigious as Morgan Stanley, was “lure them into the calm and totally fuck them.” Again, that was said of customers, not competitors. Remember, we’re not talking about some boiler room based in Vancouver or Fort Lauderdale, but two of the glitziest names in investment banking.

Derivatives hit the headlines in 1994 and early 1995, when a bout of interest rate rises engineered by the Federal Reserve put the financial markets through a ringer and Mexico into crisis. Big companies like Procter & Gamble lost millions, big-time speculators went under, and Orange County went bankrupt. And then, thanks to our system of cultivated amnesia, derivatives largely disappeared from view. According to the most recent estimates by the Bank for International Settlements, at the beginning of 1997 there were some $35 trillion in derivatives outstanding worldwide, about twice as many as there were when Partnoy retired from the business in 1995. Unofficial estimates range from $40-60 trillion. To put those numbers in perspective, gross global product—the sum of all the world’s GDPs—is under $30 trillion. 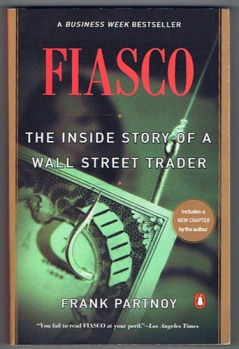 A derivative is a security whose price depends on—is derived from—something else. The simplest derivatives are (relatively familiar) instruments like futures and options. An option, for example, is the right to buy or sell something, like 100 shares of stock, at a given price over a given period of time. You may want to lock in a purchase or sale price today, even though you want to consummate the sale several months down the road, or you may simply wish to speculate cheaply on the price of the underlying asset. (These instruments are all explained at exhaustive, and possibly exhausting, length in Doug Henwood’s Wall Street.) But options and futures are straightforward stuff compared to the kinds of things that Partnoy once developed and sold. Instead of being traded on exchanges at prices and terms it’s pretty easy to understand, the complicated kind of derivatives are custom-tailored, usually for a specific buyer, on often obscure terms, and with little possibility of escape through sale to some other punter.

That’s all a bit theoretical, so maybe a few examples would flesh things out. Want to bet that Thai interest rates will rise and Malaysian ones will fall? An investment banker would be happy to customize a derivative for you. You may want to do this because you have some business in the two countries that put you at risk should the two national bond markets move against you—or you may just be a betting sort. Or maybe you’re a pension fund manager who isn’t allowed to borrow money to speculate in foreign currencies. Well, your investment banker can create something that looks like a government bond, and will pass regulatory scrutiny, but which is really a leveraged play on the British pound or anything else you’d like. Or maybe you’re the dimwitted treasurer of a county in Southern California, and you think interest rates will fall forever—and you’re so convinced of the fact, it’s not enough that you just buy bonds and hold them. You buy “structured notes” from Merrill Lynch and Morgan Stanley, that rise in value if interest rates fall, but in complex, incomprehensible ways. If interest rates rise, you can always file for bankruptcy. And if you’re a]apanese banker with big losses to hide, your friend at Morgan Stanley can create sham profits for you today—perfectly offset by sham losses some time in the future, but by then it’ll be somebody else’s problem; for the moment, all you want to do is deceive your shareholders and regulators. Indeed, it seems that lots of the troubles in Asia today are in part the deferred consequences of derivatives schemes concocted several years ago. Sometimes the client is the instigating party, sometimes the banker, but usually the banker has a better idea of what’s going on—not only of the risks, but of the giant fee buried in the complex details.

So, despite the textbook nostrums about derivatives existing to help society (meaning big investors) manage risk (meaning the wicked volatility in financial asset prices), derivatives are at least as much about embracing risk, evading regulatory scrutiny, and even avoiding taxes. While the financial environment is placid, derivatives will behave, delivering only routine losses, if at all but when things get nasty, as with the stock market in 1987, or Mexico in 1994, or Asia in 1997, they can blow up all over the place.

F.I.A.S.C.O. (the title comes from a drunken skeet-shooting competition called the Fixed Income Annual Sporting Clays Outing, in which the Morgan Stanley team was meant to sharpen its killer instincts) tells all these stories, and Partnoy even manages to accomplish the difficult task of explaining the derivatives themselves. He’s hardly a radical, nor does he have anything like a systematic view of how finance relates to the real world. Nor is his book as funny or as gracefully written as Michael Lewis’ classic Liar’s Poker. But as an insight into the crudity and rapaciousness of Wall Street culture, it’s the best thing in years. Even if derivatives don’t turn the next bear market into a rival of the 1929–32 disaster, or even if they don’t bring giant losses to the middle c1ass’s mutual fund investments, this book explains why the handful of people who work on Wall Street pull down so much money. It comes from ripping faces off, and sometimes the face-ripped don’t even know what’s happened to them.

8 Comments on “Face-ripping for fun & profit”