Profitability: high, and maybe past its peak?

As every Marxist schoolchild knows, the profits “call the tune” for the capitalist economy, as Michael Roberts put it recently. He writes:

Despite the very high mass of profit that has been generated since the economic recovery began, the rate of profit stopped rising in 2011.  That’s a sign that the US capitalist economy will not achieve any significant sustainable growth over the next year so so.  The rate remains below the peak of 1997.  But the rate is clearly higher than in was in the late 1970s and early 1980s at its trough.  That can be explained by one counteracting factor, namely the record high rate of surplus value in recent years.  But it also suggests that there is still a long way down to go for US capitalism before it reaches the bottom of the current down phase.

That is not how I see it. I see a rather high rate of profit that has maybe begun to roll over—but only after a remarkable recovery from the Great Recession’s lows. Despite that, however, U.S. corporations are not investing much domestically, producing a gusher of what financial theorists call free cash flow.

Everyone who plays this game does it by different rules. Many esteemed Marxist profit-watchers adjust the official stats in numerous ways, such as trying to eliminate “nonproductive” activity. While I understand the interest in jiggering the numbers, no known capitalist can see or feel the adjusted rate of profit. What they (and their shareholders) care about is the actual rate of profit, reported in cash money, relative to the amount of capital that had to be invested to gain the return.

Under the rules I’ve written for myself, I measure the rate of profit by dividing the profits of nonfinancial corporations (before- and after-tax, from the national income accounts; it’s in table 1.14 here) by the value of the tangible capital stock (from the Fed’s flow of funds accounts, available here—just hit “download”). Here’s a graph of the results: 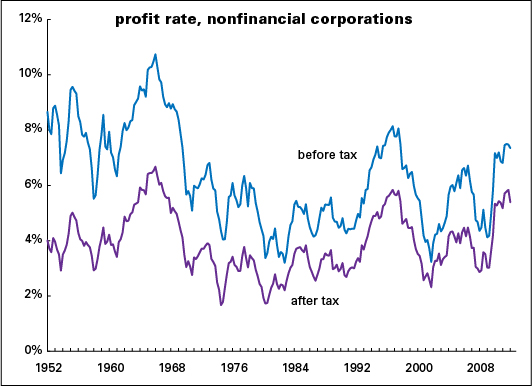 This is the long-term story I’d tell: after a peak in 1966 (coincidentally the year of the first serious credit crisis since the 1930s), the rate of profit declined hard through the miserable 1970s into a trough during the deep 1981–82 recession. But the class war from above, led by Volcker, Reagan, and the Shareholder Rebellion, succeeded in breaking labor, cutting costs, and speeding up everything. With that came a long upsurge in the profit rate, rising to a peak in 1997. This rise was the fundamental reason behind the great bull market in stocks of the 1980s and 1990s. (The market kept rising after the profit peak, but then came crashing to earth.) Profitability recovered rather quickly, coming close to the 1997 highs in 2005, then turned south. Note that in both cases, 1997 and 2005, the profit rate peaked well ahead of the economy—three and two years, respectively. (Note too that the tax code became more corporate-friendly: the 1997 and 2005 peaks after taxes were much closer to 1966 levels than the pretax measure.) And the 1966 peak was well ahead of the troubles of the 1970s.

While many lefties pronounce neoliberalism a failure, on this measure it looks like it accomplished just what it set out to accomplish: raise the profit rate back to its glory days. The subsequent peaks were a little short of 1966, before everything collapsed into inflation and diminished expectations, but not by much. To say that the rate of profit stopped rising in 2011—which is quite plausible, is to underplay the sharp recovery from 2009’s depths. And given the propensity of the profit rate to lead by several years, it’s quite possible that this crappy recovery could stumble on into 2014.

Strikingly, though you might think that with profits this high, corporate America would be investing with both hands in pursuit of more. But it isn’t. Here’s a graph of corporate cash flow (profits plus depreciation allowance) and capital expenditures:

Despite the strong recovery in cash flow, to record-breaking levels, firms are investing at levels typically seen at cyclical lows, not highs. Some cash flow is going abroad, in the form of direct investment, but still you’d think returns like these would encourage investment. Instead, they’ve been shipping out gobs to shareholder. Here’s a graph of what I call shareholder transfers (dividends plus stock buybacks plus proceeds of mergers and acquisitions) over time:

Though not at the preposterously elevated levels of the late 1990s and mid-2000s, transfers are at the high end of their historical range. Instead of serving the textbook role of raising capital for productive investment, the stock market has become a conduit for shoveling money out of the “real” sector and into the pockets of shareholders, who besides buying other securities, pay themselves nice bonuses they transform into Jaguars and houses in Southampton. Is this a decadent phase of American capitalism, where its owners choose to liquidate rather than accumulate?

Profit may call the tune, but it doesn’t necessarily guide the choreographer.

33 Comments on “Profitability: high, and maybe past its peak?”