On December 8, the Bureau of Labor Statistics (BLS) released its employment projections for the next decade (or 2014–2024 to be precise). They don’t make for happy reading.

The Bureau projects GDP growth of 2.2% a year over the decade, well under the 3.6% average that prevailed from 1950–2000, and lower even than the 2.4% average from 2000–2007, a period that contained a recession and the weakest expansion in U.S. history. And they also project that labor force participation (the sum of the employed and those actively looking for work, aka the officially unemployed), which has been frustratingly stagnant in this expansion, will decline by 2 percentage points over the decade. This is partly the result of an aging population—the median age of the labor force, which was 37.7 in 1994, and was 41.9 in 2014, will rise to 42.4 in 2024. In other words, job growth will go from roughly matching population growth to lagging it.

But, as the graphs below show, the aging population is far from the whole story. As the top graph shows, participation for the two youngest categories is slated to decline from current levels, and remain essentially unchanged for 25–44 year olds. The only categories projected to rise are those over the age of 45, with the over-65s in the lead. As the bottom graph shows, comparisons over the 30-year interval are even more striking, with all but the over-55 categories declining. The decline among teen workers is the most striking; one presumes they’re getting more schooling, and the early-20s cohort as well, but as we’ll see in a moment, the labor market might not welcome them generously when they graduate. But the decline in prime-aged workers, the 25–54 set, is forecast to be 2.2 percentage points from 1994 levels. The 55–64 and 65+ groups are projected to rise by over 9 points from 1994 levels. So while the aging population explains some of the overall decline, you’d never know it by just looking at the geezerly skew of tomorrow’s labor force. 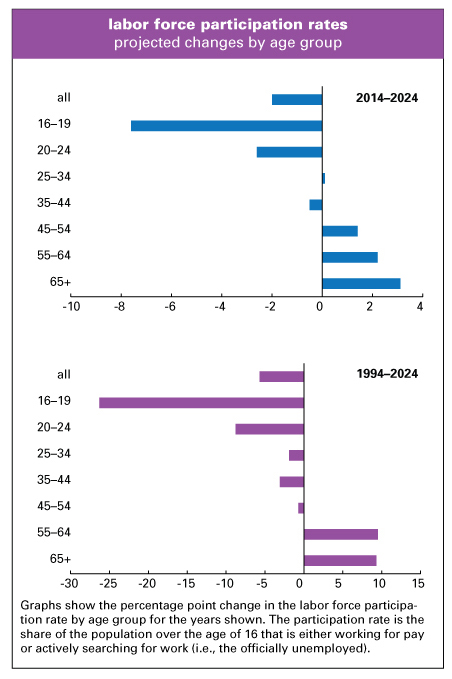 And while we hear a lot about the importance of education for jobs of the future, these projections don’t offer much support for that point of view. The box below is a list of the 15 fastest-growing occupations over the next decade (accounting for over a third of employment growth); they don’t look like the stuff of college recruitment brochures. Just four of the fifteen require a bachelor’s degree or more for entry, and none require an advanced degree. Eight require “no formal educational credential,” and just one a high school diploma. Just three have an above-median annual wage.

Graphed below is the educational distribution for the decade’s projected occupational growth. Just over half, 51%, require no more than a high school diploma for entry, and another 14% some post-high school education short of a bachelor’s. Just 35% require a bachelor’s, and 9% an advanced degree. The educational distribution of the workforce will change little from today. For example, 25.6% of today’s jobs require a bachelor’s or more for entry; in a decade, that will rise 0.6 point to a dizzying 26.2%. Today, 63.6% of jobs require no more than a high school diploma; in 2024, that will plummet by 0.8 point to 62.8%. 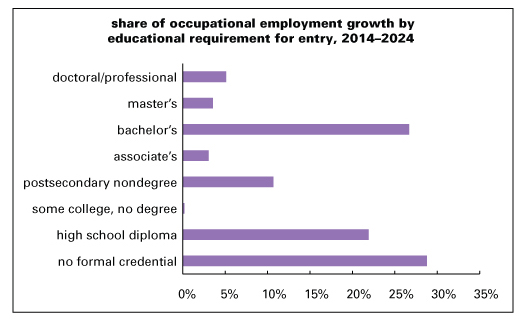 So while politicians and pundits love to talk up the need for getting more people into (and through) college—liberals prominent among them—you have to wonder what sort of job market awaits them.

Of course, these are projections. They could be wrong. But these are nonetheless the official projections of the U.S. government. If they think things are this glum, shouldn’t we be talking about it some more? Maybe talking about how they’re a good part of the reason behind attacks on non-elite higher education and the intensified disciplinary model of primary and secondary education for the bottom half of the distribution? And how an economy that promises only a modest supply of new jobs, many of them shitty, is in need of a major overhaul?