This morning the Bureau of Labor Statistics reported that 701,000 jobs disappeared in March. Economists had been expecting about a third that number. Hardest hit were bars and restaurants, accounting for 60% of the loss. Also hit hard: retail, temp work, and, shockingly, health care.

One reason job loss expectations were relatively low was that the survey of employers on which the count is based is done during the week containing the 12th—in this case, between March 8 and 14. (No one is expecting anything but a torrent of bad news in the coming weeks and months.) As the graph below shows, survey week came before the surge in applications for unemployment insurance from 282,000 in the week ending the 14th (survey week) to 3.3 million the following week and 6.6 million during the week ending the 28th. It also came before the wave of stay-in-place orders, which began on March 20. Within a week, 20 states and 4 cities issued such orders. (There’s a helpful timeline here.) It’s striking that employers began shedding workers ahead of the closures, not a good portent for the April numbers.

Expectations are that the unemployment rate, which rose 0.9 to 4.4%, will rise by at least 10 points and possibly 20 or more over the next month or two. The broad measure of unemployment, U-6, which accounts for discouraged workers (those who’ve given up the job search as hopeless but have looked in the past year) and people working part-time who’d like full-time work, rose 1.7 point to 8.7%. There is just no precedent for this rate of job loss.

The monthly surveys of households, on which the official unemployment rates are based, began in 1948, so we don’t have good stats for the slide into the Great Depression. We do have highly unofficial monthly estimates of the unemployment rate assembled by the predecessor of today’s Conference Board, available from the National Bureau of Economic Research. Those are graphed below. At the time of the great stock market crash, October 1929, the jobless rate was 2.3%. A year later it was 9.0%. It took over two years to break 20%, finally peaking at 25.6% in May 1933. By some forecasts we’ll be there before summer. 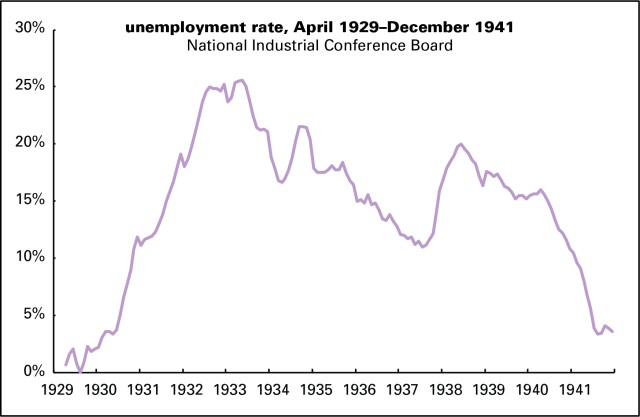