[This serves as an addendum to my article on expanded unemployment benefits Jacobin just posted.]

In April, the most recent month available, almost 6 million people were added to the food stamp rolls, reversing the long decline after the 2008–2009 recession. In percentage terms, that’s the biggest monthly increase since 1970, when the program was young and participation was just taking off. This surge is a thing unto itself. 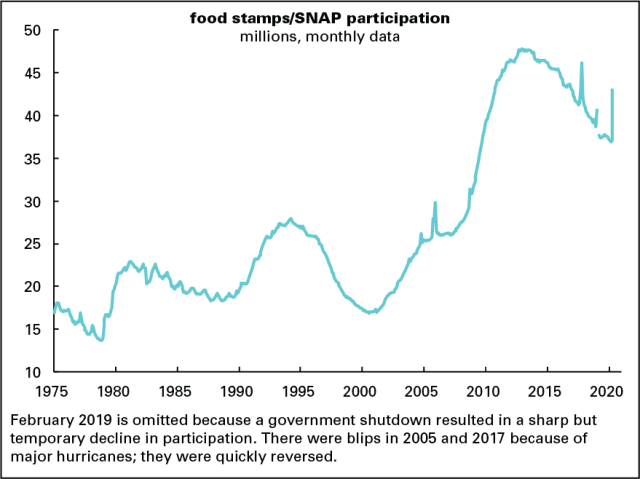 The number of participants in the food stamp program—which was renamed the Supplemental Nutrition Assistance Program (SNAP) in 2008, though the old name has stuck—declined steadily in the late 1990s, as unemployment fell sharply and real wages rose. But with the 2001 recession and the weak recovery/expansion that followed, participation rose steadily, more than doubling between the 2000 low and the 2013 high. It fell steadily through early 2020, but as a percentage of the population never got below roughly twice the trough twenty years earlier.

Benefits are far from generous, though they are a lifeline to many millions of people. As the graph shows, the real value of the average monthly benefit was increased during the 2008–2009 recession, but that was allowed to erode. In real terms (using the price index for food for preparation at home), it’s just 7% above where it was in 1992, even though the cost of food prepared at home is up 78% since then.

The average monthly benefit per person was $181.60 in April, which works out to a rather tight $1.98 per meal. (All the SNAP stats are here.) That benefit level is about two-thirds of what the Agriculture Department calls a “thrifty” food budget for a non-elderly adult—a diet that, by the Department’s own accounting, doesn’t provide the recommended daily allowances of vitamin E or potassium; sadly, as they declare in cool bureaucratic prose, “a solution could not be obtained.”

Despite the tightness of the budget, and the obvious need for food assistance even in more normal times, the Trump administration and Congressional Republicans have been trying to cut the program dramatically. It’s not a major budget item—0.3% of GDP—but reactionaries hate subsidizing food for the poor. Trump’s 2021 budget proposed cutting SNAP by nearly a third over the next decade. More recently, the administration tried to impose new regulations that would have kicked about 700,000 people off food stamps, a move that was blocked by a judge in March. Agriculture Secretary Sonny Perdue—no relation to the chicken brand—justified these bits of savagery by saying the program was meant to provide “assistance through difficult times, not a way of life.” Because nothing says luxurious ease like a budget of $1.98 per meal.