Visiting the occupiers of Wall Street

We—my wife Liza Featherstone and son Ivan Henwood and I—paid a visit to the Occupy Wall Street protest yesterday afternoon. Here’s an illustrated report. I also did a segment for my radio show. Audio for that is at the bottom of this entry.

The big media have largely ignored the OWS protest (though if you’re part of a certain kind of network on Facebook, you can’t miss it). Called first by Adbusters with only the most minimal agenda, it’s taking on a life of its own, as people trickle in from all over. And I do mean minimal—the agenda is supposed to evolve spontaneously. When I talked with one of the organizers last week, she told me that they merely hoped “to build the new inside the shell of the old,” and though that sounds seductively wonderful, I’m not sure how robust such an approach can really be.

Or, to quote the event’s Facebook page, named in the now-ubiquitous hashtag fashion (#OCCUPYWALLSTREET):

we zero in on what our one demand will be, a demand that awakens the imagination and, if achieved, would propel us toward the radical democracy of the future

I don’t think that has Lloyd Blankfein trembling in his shoes. Not that I know what could make him tremble, aside from a few quarterly losses for Goldman.

When we got to Wall Street, a band of what appeared to be several hundred were conducting the “closing bell” march, joining in the traditional observation of the end of the trading day on the New York Stock Exchange. The dominant chant was: “Banks got bailed out, we got sold out.” Here’s glimpse of what it looked like, from the corner where George Washington was inaugurated for the first time. 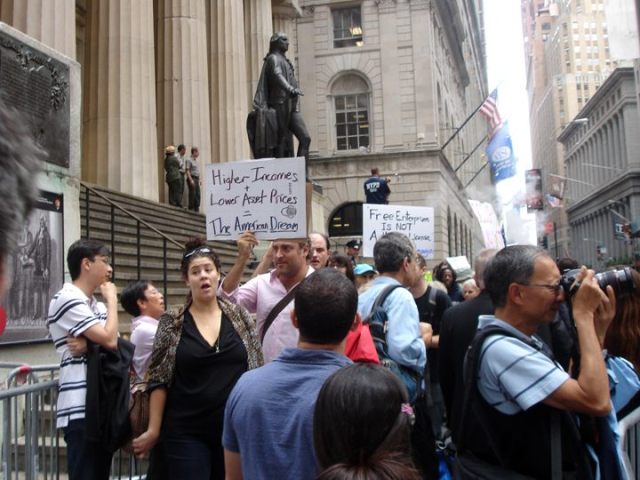 It’s not often you see a quote from Ronald Reagan at an event like this, but the politics of the participants looked like a mixed bag, a topic I’ll return to. 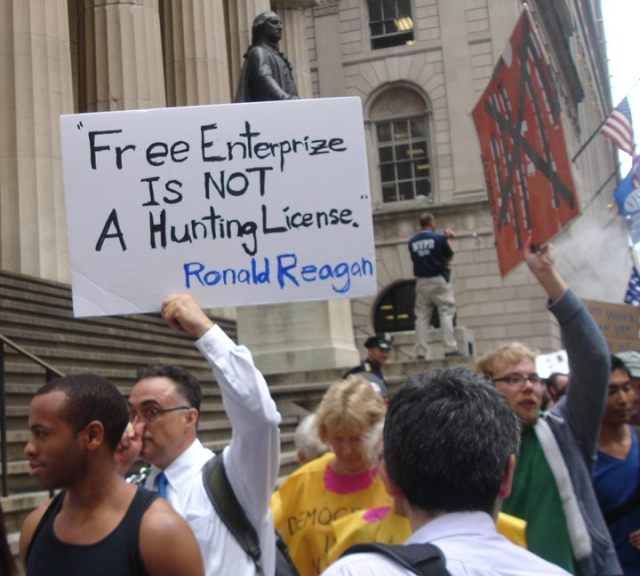 This being New York, a healthy contingent of cops was on the scene. 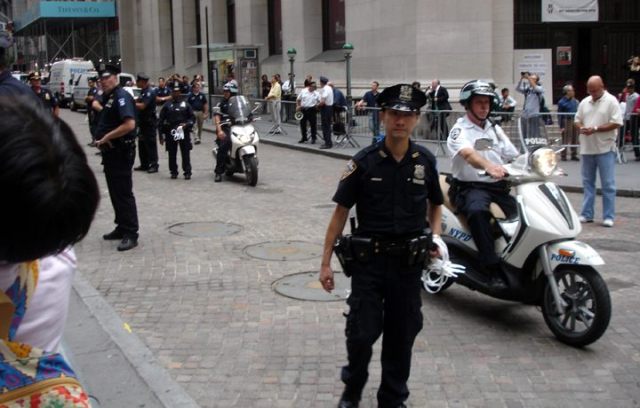 At the corner of Wall and Broadway, things dispersed some, with some of the crowd (including us) heading towards the base camp, Zuccotti Park at the corner of Broadway and Liberty, not far from the “Freedom Tower” (under construction). Here’s what the park looked like from the Broadway side.

Within, one quickly encountered familiar iconography, e.g., this U.S. flag with corporate logos in place of the stars (photo by Ivan Henwood). 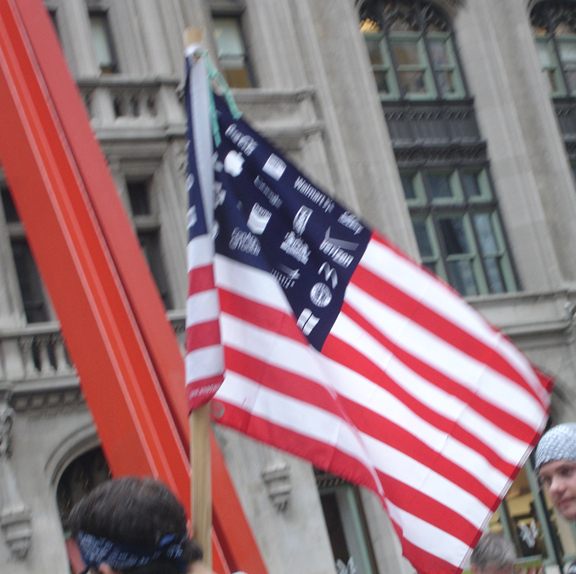 Posters promoting the event, exhibiting that Adbusters style that’s a reminder that Judith Butler was so right to say that you have to inhabit what you parody.

The crowd was a mix of locals and migrants. I chatted with people who’d come from Missouri and Maine to express frustration and show solidarity. (They’re on the audio segment.) The woman from Maine was unemployed for a year and willing to stay as long as anyone else is there—through January, if that’s what it takes. But I also talked with locals from Brooklyn and Queens. Onlookers and passers-by were neutral to friendly—there were no jeers except some aimed for a lone and odious anti-Semite. 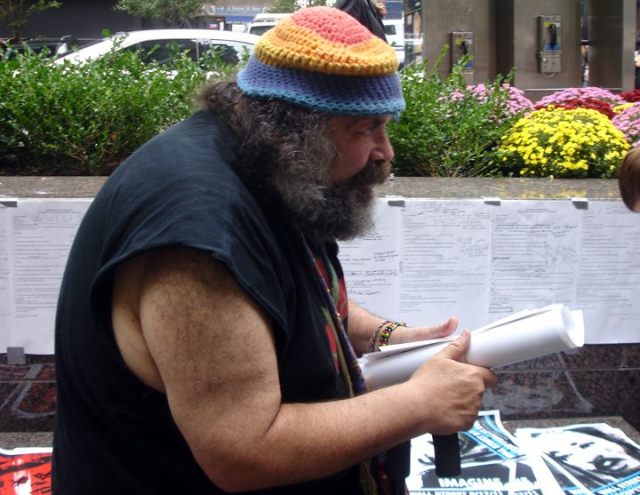 Principles were being worked on in standard “consensus” fashion, which apparently means writing comments on pages taped to a wall. (The type is readable if you click on the pix to enlarge them.) 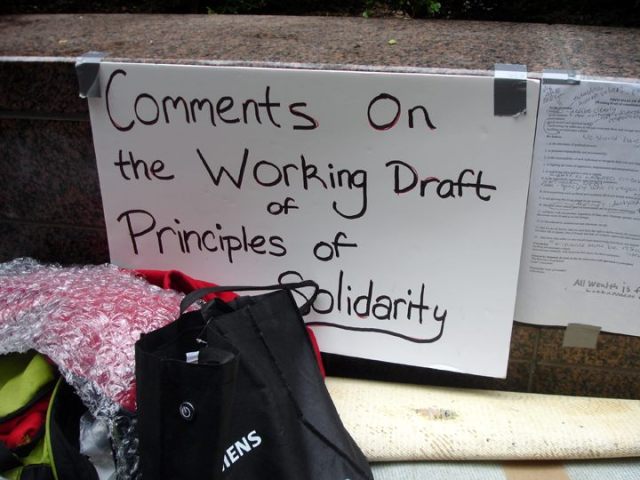 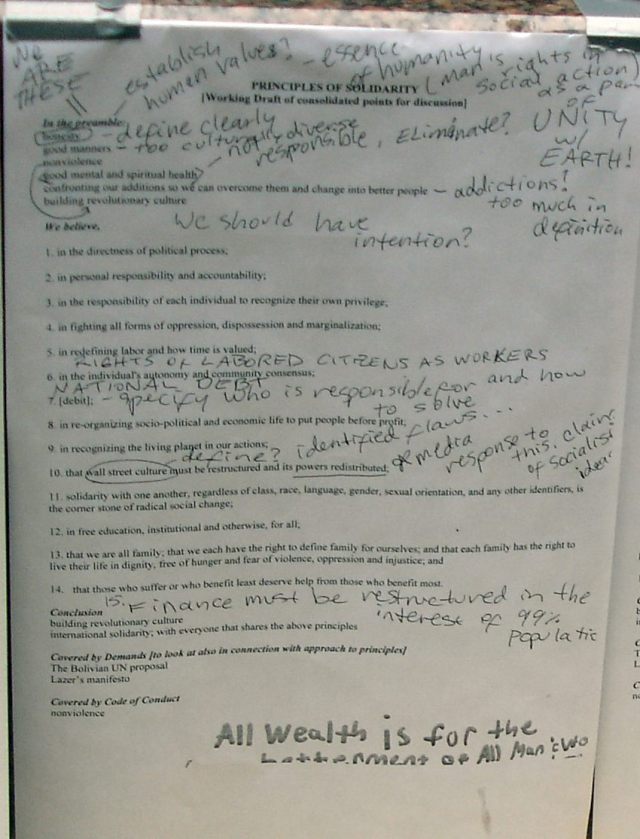 Signs were being made constantly. 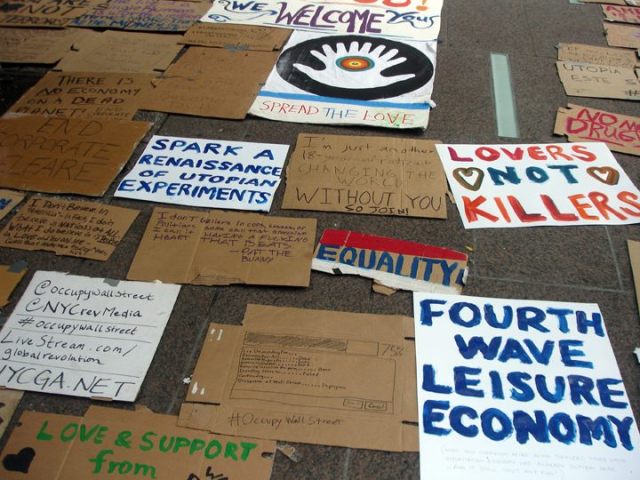 I asked the guy who made the “utopian experiments” sign what he had in mind. (The interview is on the audio segment.) He said he wanted to see a rebirth of 1960s-style “intentional communities,” though more entrepreneurial this time, capable of supporting themselves through green business and cyberschemes. Aside from this apostle of green entrepreneuriship, I overheard others talking about how Wall Street stifled small business—as if small business didn’t pay worse and support more right-wing politicians than big business. It was a very mixed bag ideologically. It seems like the latest iteration of American populism, which hates Wall Street and internationalization but loves small business and the local. Of course, livestreaming the proceedings on the web (see here) depends on a huge technical infrastructure, but no one thinks about that at these events.

I was skeptical of this at first, and I still am. There’s no agenda at all. It’s mostly about process—meaning consensus. There’s no organization to speak of. But maybe people will just keep trickling in and it will grow and persist and something good could come of it. Word is that some buses will be coming in from Wisconsin soon. At some point, though, I fear the NYPD will stop putting up with a semi-permanent occupation of a small park. I hope not. But if you’re listening to this, and are in a position to head to lower Manhattan, check it out. Zuccotti Park, at the corner of Broadway and Liberty St.

Give the NYPD something to watch. 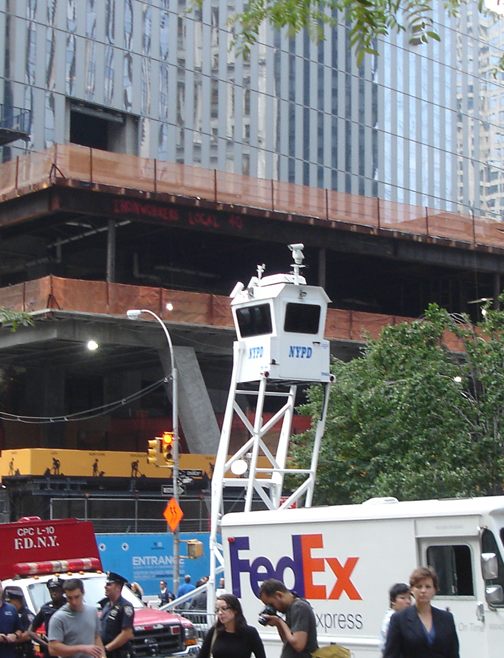 Here’s the report on the event from my radio show. For the full show, click here. This is just a six-minute excerpt.

All photos by Doug Henwood except the corporate logo flag, by Ivan Henwood.

← The housing boom (cont.)
1930s phantasms from the right: how to make up stories with numbers →

27 Comments on “Visiting the occupiers of Wall Street”