Second Amendment fetishism aside, there’s an old saying that the working class’s ultimate weapon is withholding labor through slowdowns and strikes. By that measure, the U.S. working class has been effectively disarmed since the 1980s. Here’s a graph of the annual number of work stoppages since 1950 (which includes lockouts as well as strikes—unfortunately, there’s no way of distinguishing between the two). They’re up from the recession low of 5—yes, 5—in 2009, but not by much: there were 15 in all of 2013. Between 1947 and 1979, the average was 303. (The data begins in 1947; I started the graph in 1950 just to have neat decade markers.) They produced a total 290,000 days of what the Bureau of Labor Statistics calls “idleness”; the 1947–79 average was 24,550,000. That’s a 99% decline.

Jane McAlevey, the ace labor organizer and author of Raising Expectations (And Raising Hell)—just about to appear in paperback from Verso—says that her mentor, Jerry Brown of 1199 New England, used to say that workers should strike at least once every two years just to remind them of their power. Those were the days. 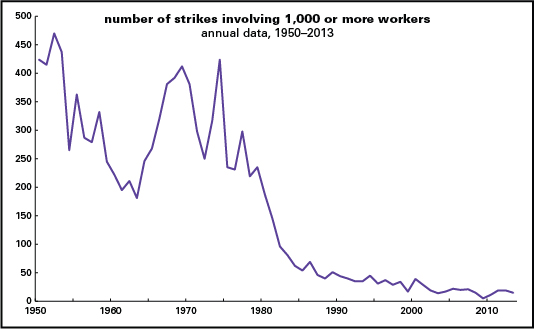 The portal to the BLS’s strike data is here.

3 Comments on “A working class disarmed”