Employers, right-wing politicians, and the pundits who speak for them have been claiming that the expansion of unemployment insurance (UI) benefits to counter covid woes was hurting job growth. By making it possible to refuse crappy jobs, or maybe even not to work at all, that sort of public sector generosity was making the working class too picky. They’re a lazy lot, you know, and need a good kick in the ass to get them to perform their class duty of laboring for the boss.

Problem is there’s just no evidence that expanded UI benefits hurt job growth. They ended nationwide on September 6, and job growth last month was the weakest of the year—just 194,000, almost half a million below the average of the previous six months.

Comparing job growth in states that cut benefits before the federal deadline with those that didn’t underscores the point. State employment data isn’t released until two weeks after the national data, so we won’t have September data until October 22. But the data through August is revealing.

Graphed below are rates of job growth in August and for the previous three months for cutters (states who cut expanded benefits before the federal termination) vs. non-cutters (those that didn’t). Cutters are divided into those who cut early, before June 26, and those that cut later. The roster is at the bottom of this page. 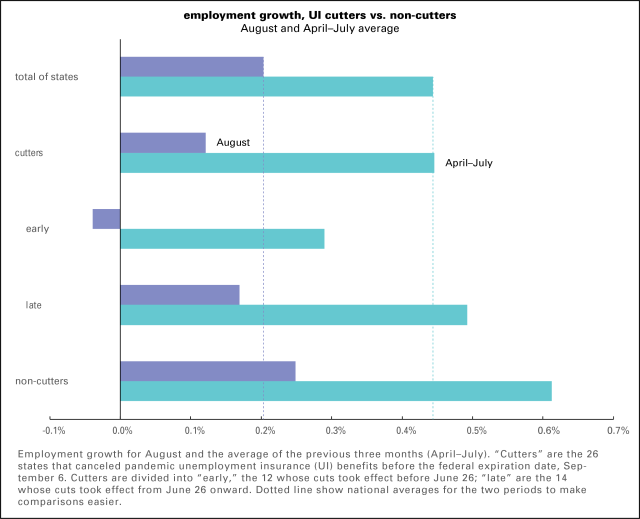 As the graph shows, non-cutters saw faster job growth than cutters for both August and the three months preceding. In August, national employment grew 0.20%. Among cutters, it grew 0.12%; among non-cutters, 0.25% (These are based on totals of each of the categories, no simple averages of state growth rates.) Within the cutters, the early birds actually saw a small loss of jobs, 0.04%. The April–July figures tell a similar story, with cutters (0.45%) lagging non-cutters (0.61%), and the early cutters (0.29%) doing worse than those later to the cruel game (0.49%).

A look at the roster of cutters below shows that many of the states were covid hotspots over the summer. And there’s a big disparity in vaccination rates: cutters have an average vaccination rate of 50% (early: 48%, late: 51%) compared with 60% among non-cutters. Maybe covid is more of a problem than generous income supports.

Also, there’s no good reason for the feds to have ended expanded benefits. They’ve helped millions cope with a still-broken job market. But it was an additional stroke of cruelty to cut them before the Washington did. I was going to call it pointless cruelty, but cruelty was the point.